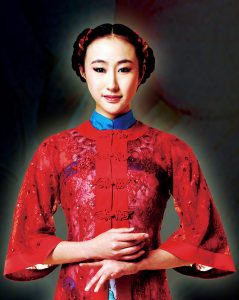 Zhang Yashu is a genuine dance superstar in China being one of the most recognisable and beloved dancers of her generation.

Although not yet widely known to UK audiences, Zhang Yashu – The first principal Dancer of Wuxi Song & Dance Theatre, is a name fit to be mentioned in the same breath as China’s best contemporary and classical dancers.

Among many widely celebrated achievements, she was a highly popular runner-up in the Chinese version of the TV show “So you think you can dance” and has starred in several Film , TV and Theatre roles,  recently completing shooting for the upcoming dance film Red River Valley.

Since her breakout starring role as Principal dancer in the grand folk dance drama Xi Shi to wide acclaim in 2007, Zhang Yashu’s star has continued to rise.

She has developed a distinctive style, giving a series of technically beautiful yet emotionally resonant stand out performances that have set the benchmark in  a wide range of challenging and diverse dance roles ( pas de deux Mingfeng,Black Wing and Moonlight, Jasmine, Red river valley, The flowers war, Nine Coloured Deer, etc) .

Her approach to dance has been described by leading Chinese theatre critics as combining a heady mix of dynamic technical excellence and rich emotional sensitivity. 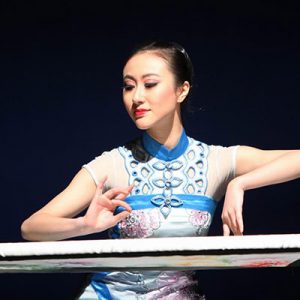 Photo courtesy of The Kennedy Center.

Zhang is renowned for  bringing  a spiritual sensuousness  and depth to her roles that has wowed audiences both in China and the West.  Zhang is the first Chinese female dancer to appear at The Kennedy Center Opera House,  where she performed her portrayal of the Embroidery girl for the first time to an enraptured US audience.

The famous Dance judge Jinxing (金星) was captivated by her snakelike dance in White Snake and Green Snake, and choreographed a dance called “Wind” specifically for Zhang. Her TV performance of “Wind” became one of the stand out dance performances of recent memory, demonstrating her astounding variety and consummate technical skill.

Since then, she has become one of  ‘Jinxing’s favorite  muses  and  has received a popular nickname, “The Snake Seductress”.

Having both starred in  contemporary and classical pieces to high acclaim she is passionately committed  to the art of physical expression through dance in all its’ forms.  Her performances demonstrate a rarely seen combination of  sophisticated intelligence,  tenacious technical mastery and soulful emotional feel. In her own words She loves dancing and wishes nothing more than to dance her whole life long; having seen her perform on numerous occasions we can only hope her dreams come true.

Both of Zhang Yashu’s  parents are dancers.

She started dancing age  7 then attended the Sichuan Dance College for 6 years. During this period, she won Golden Medals at the renowned Beijing Dance Competition the Tao-Li Cup. She was recruited into the prestigious Wuxi Song and Dance Institute after her graduation and became one of the institute’s principal dancers, and has starred in a number of grand dance dramas, including Xishi Beauty; Jasmine; and of course The Embroidery Girl.

In 2014, she participated in the Chinese version of the internationally successful  TV  dance competition “So You Think You Can Dance” (中国好舞蹈), where in  a close run final she achieved 2nd place.

She is recognised throughout China as one of her generation’s leading lights,  as a dancer and latterly as a choreographer and producer in her own right (Nine-coloured Deer).

Zhang’s performances typically employ her unique gifts at utilising  face and form to give voice to her character’s deepest feeling through movement alone.  She is able to express complex and deeply felt emotion like few other dancers, employing a rare combination of traditional and contemporary elements to bring to life a diverse cast of characters  in a complex and highly acclaimed  repertoire. We think that UK audiences will have a treat in store when she reprises her celebrated role in the the revisioned version of The Embroidery girl  this March.