0044 20 8348 6306 info@ms-L.co.uk
MsL has done many works to promote Wu-shu, the contemporary form of Chinese martial Art. It is not just because Liu Li was a Wu-shu athlete  when she practised it at her childhood, it is more about the Wu-shu forms are particularly beautiful and elegant, Liu Li says she sees “Wu-shu as a performing art more than a sport, it perfectly suits on stage.” 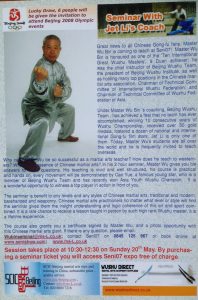 Great news to all Chinese Gong-fu fans, Master Wu Bin is coming to teach at Seni07!  Master Wu Bin is honored as one of the ‘Ten International Great Wushu Masters, 9 Duan achiever; he was the chief instructor of Beijing Wushu Team, the president of Beijing Wushu Institute, as well as holding many top positions in the Chinese martial arts association, Chairman of Technical Committee of International Wushu Federation, and Chairman of Technical Committee of Wushu Federation of Asia. Under Master Wu Bin ‘s coaching, Beijing Wushu Team has achieved a feat that no team has ever accomplished, winning 10 consecutive years of Wushu Championship, received over 50 gold medals, fostered a dozen of national and international Gong-fu film stars, Jet Lee is only one of them. Today, Master Wu’s students are all over the world and he is frequently invited to teach overseas. Why can Master Wu be so successful as a martial arts teacher? How does he teach to westerners? What is the essence of Chinese martial arts? In his 2 hour seminar, Master Wu gives you his answers to these questions. His teaching is vivid and well structured, his course is practical and hands on, every movement will be demonstrated by Cao Yue, a famous young star, who is a member of Beijing Wushu Team and has recently won Asia Youth Wushu Champion.  It is a wonderful opportunity to witness a top player in action in front of you. The seminar is a benefit to any levels and any styles of Chinese martial arts, traditional and modern, barehanded and weaponry. Chinese martial arts practitioners no matter what level or style will find the seminar gives them the insight understanding and logic coherence of this art and sport combined. It is a rare chance to receive a lesson taught in person by such high-rank Wushu master, it is a lifetime experience. The course also grants you a certificate signed by Master Wu and a photo opportunity with this Chinese martial arts giant.

Ms-L introduced Tianjin Wushu team to the martial arts club in London University and hosted a Wushu seminar in the famous Room101. Southern style and Cudgel weapon style were taught to the club members. The seminar lasted a whole day. Wushu players and university students shared meals and party together in the campus, apart from Wushu learning, friendship was made between nations. The sports department of the University also supported the event.

UK Wutan International is one of the biggest Chinese Wushu Association in the UK. It has many clubs across the UK. Mr They and Mrs They have dedicated themselves to promote Chinese Wushu and have coached a number of British Wushu Champions during past. Mrs They were an excellent Wushu player herself. Ms-L’s performing team staged a number of shows together with Wutan Wushu members.

The Wushu shows were very popular in the west coast city Aberystwyth although there was not a Wushu club there. Enthusiastic local karate club hosted a welcome party for the arrival of the team. At the party, the two parties exchanged performances as well as cards, photos and signatures. 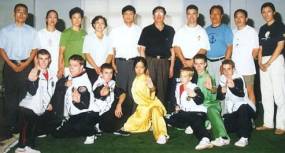 Led by Mr Neil Adawy, Kungfu Widow Wushu club based in Reading was very enthusiastic about Wushu. After series of training courses from the instructors introduced by Ms-L, the club decided to take a trip to China to learn more Wushu. They were welcomed in China and arranged to stay in Tianjin University and practised Wushu side by side with Chinese Wushu students. They lived there for a month, apart from learning Wushu, they also visited a number of famous sights, and experienced local culture, which left them many wonderful memories for a lifetime.

The Northern Praying Mantis Kung Fu School was started in 1971 by chief instructor K.S.M Lee, ranked as the 5th-degree black belt, a versatile Wushu master. The school is attached to the University of Huddersfield. Over the years, many hundreds of people have benefited from being a member of this school and some have gone on to become instructors. Ms-L’s Wushu performance was received by a hundred of its members in Leeds. 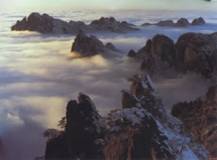 Huangshan intrigues and astonishes all visitors with spectacular rocky peaks, oddly shaped pines, crystal-clear mountain springs and the sea of clouds covering the highest peaks. After exciting Za-Ji show, 200 audience signed for Za-Ji Delegation Tour organized by Ms-L. The delegates were invited as guests to join this arts and cultural promotional event. Anhui Acrobatics company showed their dedicated training sessions as well as accompanied them onto nearby Huangshan Mount as well as famous city Shanghai.

Western kids used to have an impression that Japan was much bigger than China, in the same way, the Chinese thought Britain was bigger than America. The actual sizes of the countries have never changed over the years, but the impression and the concepts of these nations are constantly changing. More and more people are preparing to visit China now, a massive country with a rich mix of cultural-historical sights and over 5000 years of written history recording her 1500 flourishing years leading the world’s economy and the sufferings during the last 2 centuries when the nation was declining towards becoming a colony after the powder invented for fireworks was used for guns; the compass helping the Taoists in their long journey on foot to seek enlightenment and create a better world, was used by military fleets to conquer foreign lands, herbal medicines for curing human illness were taken over by more……

Looking at all Wen-peng’s certificates and achievements piled on my desk, I am so overwhelmed by this talented, young Wushu player who is still in his early 20s. I met him once when he came to give lessons to a British Wushu Association in the UK. I was impressed by his character and the way he practised Tai Chi: amiable, steady, gentle-polite on the exterior but firm-earnest inside. I had a chance to ask his opinion about British Wushu. He said Britain needed quality Wushu instructors. I joked to him: “Would you like to be an instructor in the UK?” He smiled: “Maybe”  more...