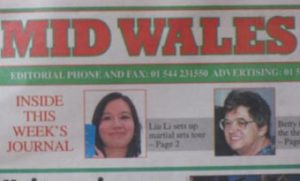 Liu Li said “ I believe that a real art has no borders. The exchange of art and culture is the best way to bridge the gaps and promote appreciation and friendship between nations” 刘莉相信：‘真正的艺术是没有国界的。 文化艺术交流是最好的形式促进国家之间的欣赏和友谊。’

“In Za-Ji, an alarmingly fit and ever-smiling young cast tries just about everything else within the realm of physical possibility. Directed by Jianping Zhu, the show is a sometimes outrageously entertaining blend of kitsch production values and gob-smacking stunts. 杂技上，一群精力充沛的年轻演员在台上几乎无所不能，整台晚会很震撼，技精能绝，但节目编排上未能脱俗”。

The shows introduced or organised by Ms-L has received many excellent media reviews, some of the original copies are luckily kept and posted on this website, and most of them are lost or the formats were not good enough to be presented here.

The positive comments suggest that Chinese martial arts have been widely accepted into British culture. There are Chinese martial arts and Tai Chi schools at the every corner of this country. MsL has run a lot of events to collect and build a network of Chinses cultural fans.

These shows please audiences of all ages, with many people returning to watch some shows twice. More than 200 people booked to join a trip to visit the acrobatic company in China following Za Ji Acrobatic Spectacular, which just said how attractive the show was.  Whereas Western theatre was introduced from ancient Greece back in 330BC, the success of Shakespeare productions has promoted British theatre greatly during last 300 years,  Sir Andrew Lloyds Webb ‘s musicals boosted West End production to a new height. Such grand theatrical production is relatively new to Chinese people. There were 8 stage productions produced during Culture revolution, eg.: Red Lantern Story, White Hair Girl, Red Lady Army, but for most of the time, there have been mainly variety shows on stage, such as Chinese New Year gala has enjoyed Chinese public immensely with the scale that no country could possibly beat with.