The West’s fascination with Eastern culture has gathered momentum over the decades, to the extent where it has been appropriated and absorbed into our own popular culture – reaching its zenith in Hollywood action movies such as The Matrix Reloaded and Kill Bill. 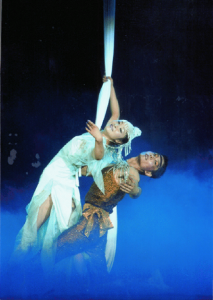 This show, touring the UK for the first time ever and featuring the award-winning Anhui Acrobatic Troupe, has more in common with the disciplines of the circus than those of the martial arts dojo – but the sheer athleticism and showmanship on display here is nothing short of breathtaking, and I would defy anyone to sit through this performance without smiling.

The show opens with a Millennium Dome-style aerial act which sets out to tell the story of a pair of ill-starred lovers and which involves some very intricate mid-air manoeuvres: from here the production opens up into a series of thrilling set-pieces in which the skills of the performers – both male and female – are stretched to the limit.

There are a number of impressive routines involving wooden chairs, which are stacked on top of each other time and time again until the person standing at the top is almost out of sight: another sequence has the acrobats perched upside down on the back of each chair, holding themselves up with just one hand. 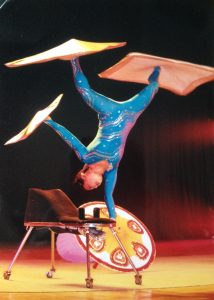 The linking sequences, clearly intended to fill in time between the more spectacular aerial and balancing acts, are perhaps the weakest parts of the show – though the exotic Eastern mood is maintained throughout and the pace never flags.

The troupe is currently in the middle of an extensive tour which will culminate in a two-week stay at London’s Peacock Theatre from November 17-29, and I would recommend it to anyone who hungers for that rarest of theatrical animals – a real, honest-to- goodness family show designed to appeal to all ages.

Truly amazing in every sense of the word – and certainly more compelling than the idea of some daffy American performance artist locking himself inside a glass cage for weeks on end. The likes of David Blaine could learn a lot about pushing one’s body to the limit from a show such as this, which – in the words of British-Chinese impresario Liu Li Wood – demonstrates that “art has no borders”.

|< Back to Media Reviews